Not only is the 3D printer huge but the company behind it has also grown enormously. What started as an art project for the company BigRep, is developing into a commercial success.

Printing a full size 1:1 chair, a table, a traffic cone or small parts are not any problem for BigRep One from the 3D printer company BigRep. The printer is one of the largest commercial 3D printer that uses a process that build parts layer-by-layer from the bottom up by heating and extruding thermoplastic filament. The size and its functionality have made the printer evolving into a sales success.

BigRep One Version 3 is the latest version. The 3D printer has been compared to the prototype from 2014 and its predecessor, BigRep One 2. Lots have been changed and improved since then, says company director René Gurka talking to Golem.de.

The operation should be simple

Some modifications are visible. For example, the timing belt for the print head controller have disappeared and is now behind a cover. The vertical guidance for the print head has become leaner. The operational panel is no longer housed as its predecessors in an external cabinet, but attached to the device. The operation panel, being a touch screen version is connected to a small industrial PC. The user interface has been re-designed, which simplifies operation. Meanwhile, the printer also have WLAN, making it possible to software service the machine from Berlin or to install updates.

Above the 3d printer frame are the holders of the two filament coils - one for building material, the other for the supporting material such as PVA. The PVA filament roll is enclosed in a cover, which closes the filament airtight so that the PVA does not absorb moisture from the surrounding air making it bad. The holders are also stable enough for 10-kilogram filament rolls.

It is needed because the printer has a higher throughput: It now also processes filament with a diameter of 2 millimeters. This reduces the resolution - the objects distinct grooves can be seen. This allows large workpieces to be built much more quickly.

Finally, the print head and the printing bed have been modified: The print head is equipped with a sensor, which simplifies calibration of the print bed. The sensor also detects the edges of any workpiece and can continue to build on it.

The print bed is also improved with auto-leveling.

The print head with the two extruders was modified: The one who is printing is moved slightly upward. That and an automatic cleaning process when changing heads to prevent mixing the two plastics and so contaminate the pressure.

The BigRep One Version 3 is thus a ready platform says Gurka. Further modifications were once planned. However, the company will develop more applications. This includes a webcam to monitor the pressure from a distance, as well as making the print heads being capable of printing other plastics.

BigRep sold all over the world

In year 2014, the company had eight employees. Meanwhile today it have 50 people jumping in and forth in the Kreuzberg factory floor, of which nearly half are developers. Founder Lukas Oehmigen is no longer there. He had the 3D printer originally developed as a “research project”, in order to produce great works of art. The BigRep One Version 1 become real because of the very high interest from the beginning. Oehmigen is today working again as an artist.

Almost 100 units have been sold from the company since last year, and still not all were yet delivered, according to Gurka. This year, the production should be in the low three-digit area. The aim is a rate of about 15 units per month. Customers, he says, came from all over the world: Australia, China, Japan, New Zealand, South Korea, and USA.

It was reported that the BigOne V1 costs as much as 14 Makerbot Replicator 2X printers. That said, around 39 000 USD per machine.

Many buyers are universities

Many customers are universities - about a quarter. But many companies are also buying the machines: car manufacturers, machine builders, architects, designers.
The customer uses the printer not only to print out design but also for molds, where they then produce workpieces made of carbon fiber reinforced plastic.
An Australian bus manufacturer used the printer to build a cladding for the headlights. The team HTW Motorsport from the Academy of Sciences in Berlin has 3D printed the nose for their racing car. But for art projects, the printer is used just like before. An artist used the printer to print out molds for a bronze sculpture which then was exhibited last year at a festival in the US state of Nevada.
Another artist and musician in Moscow used the printer to print the corpus for an electric guitar.

The employees themselves are also experimenting with the printer: Everywhere there are different parts in the company. The results: a television, tower in orange and white, a fruit bowl with geometric pattern or a stool with intricately tangled legs, which was built in spite of the angle without support structure - the ambition of the designer was obviously to explore the limits of the device.
Anyone who buys a 700 kilogram and 50,000-euro Big Rep today do not need to assemble it on site. The necessary precision would not be ensure at an installation on site, says Gurka. The printer is assembled by a service provider, and then delivered.
But that also defines the upper limit for the size of the BigRep says Gurka, pointing to a large wooden box: It must fit through the door of a cargo plane - and by the own elevator. A Very BigRep will thus probably not enter.

The BigRep One Version 3 and filaments can be bought from their homepage:

3Dfilamenta Marketplace have invited BigRep to join the marketplace 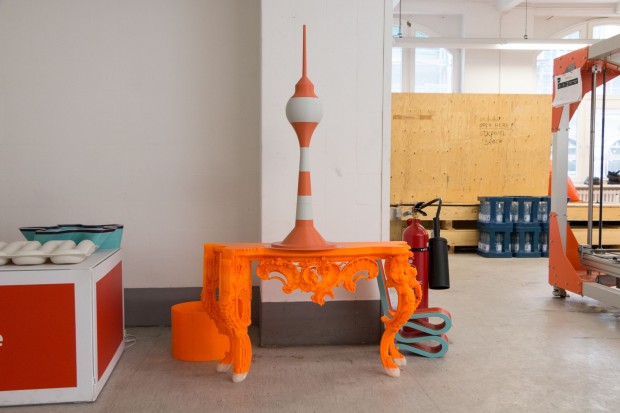 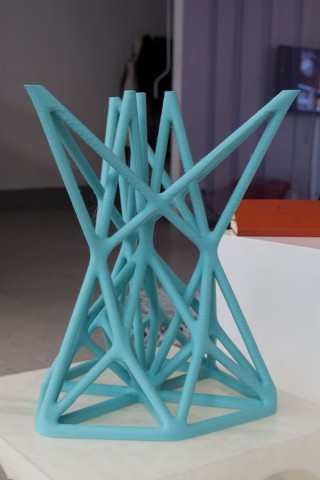