3D printer as a tool for the kitchen? This is what the future will be like, according Phair Tsai from XYZ Printing. 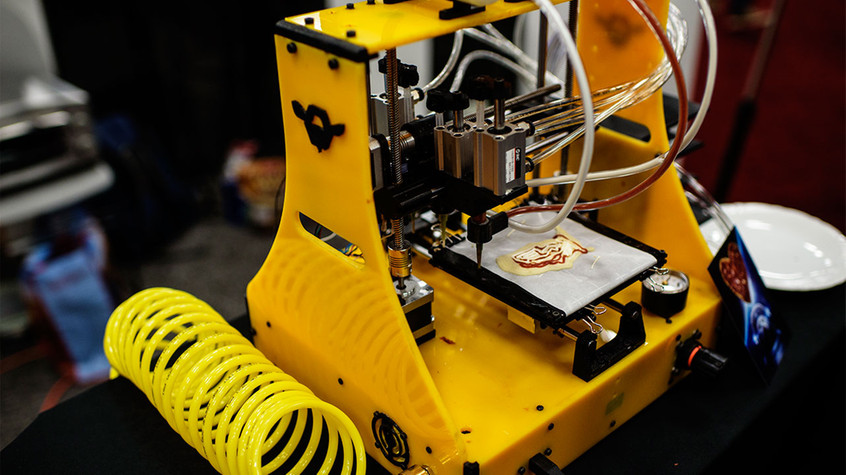 A prototype of a Beehex 3D-printer that prints pizzas on six minutes. Photo: Jesper Frisk

Food is a new hot area in the tech scene. It covers everything from producing vegetable meat and smart shopping bags to the production of space diet. Interest is high - all have to eat.

XYZ Printing is betting on 3D printers that can produce pizzas, cakes and other dishes.

“When it comes to 3D printed food it means applying layer on layer. In such a printer, we simply add the cookie dough that is pressed out little by little, “said Phair Tsai, development manager at XYZ Printing, when Di Digital meets her in Austin.

3D printers use tubes of ingredients in the same way as ordinary printers have ink. But 3D printers are not a solution to quickly get food on the table. Beehex 3D printer makes a pizza in six minutes and Phair Tsai makes four biscuits in half an hour (before baking).

So why would you use a 3D printer for cooking, except out of curiosity?

“I think it is a good application to make the mold when it comes to baking. The design of this cake is based on panda Emoji on my Iphone. Itâ€™s perfect for it because Iâ€™m good at cooking, but I do not know how to get to the really small ears and eyes of a panda, â€ťsays Phair Tsai.

With the future of 3D printers we will hopefully be able to do more than print pizzas and cakes. According to Phair Tsai it will become a practical tool that can recover our foreign dining experiences at home.

“I think the food printer will be developed to make fresh pasta, Chinese dumplings or French bread, the food we eat when we are traveling, but we want to experience it again when we come home,” she says.

But she also believes that 3D printers can be an important element in future of food.

“Along with the new biotechnology, 3D printers help us to prepare food with new protein sources. In time, they probably also help us live more sustainably and develop solutions for future space travel. ”